3-True story: A Martian on Earth 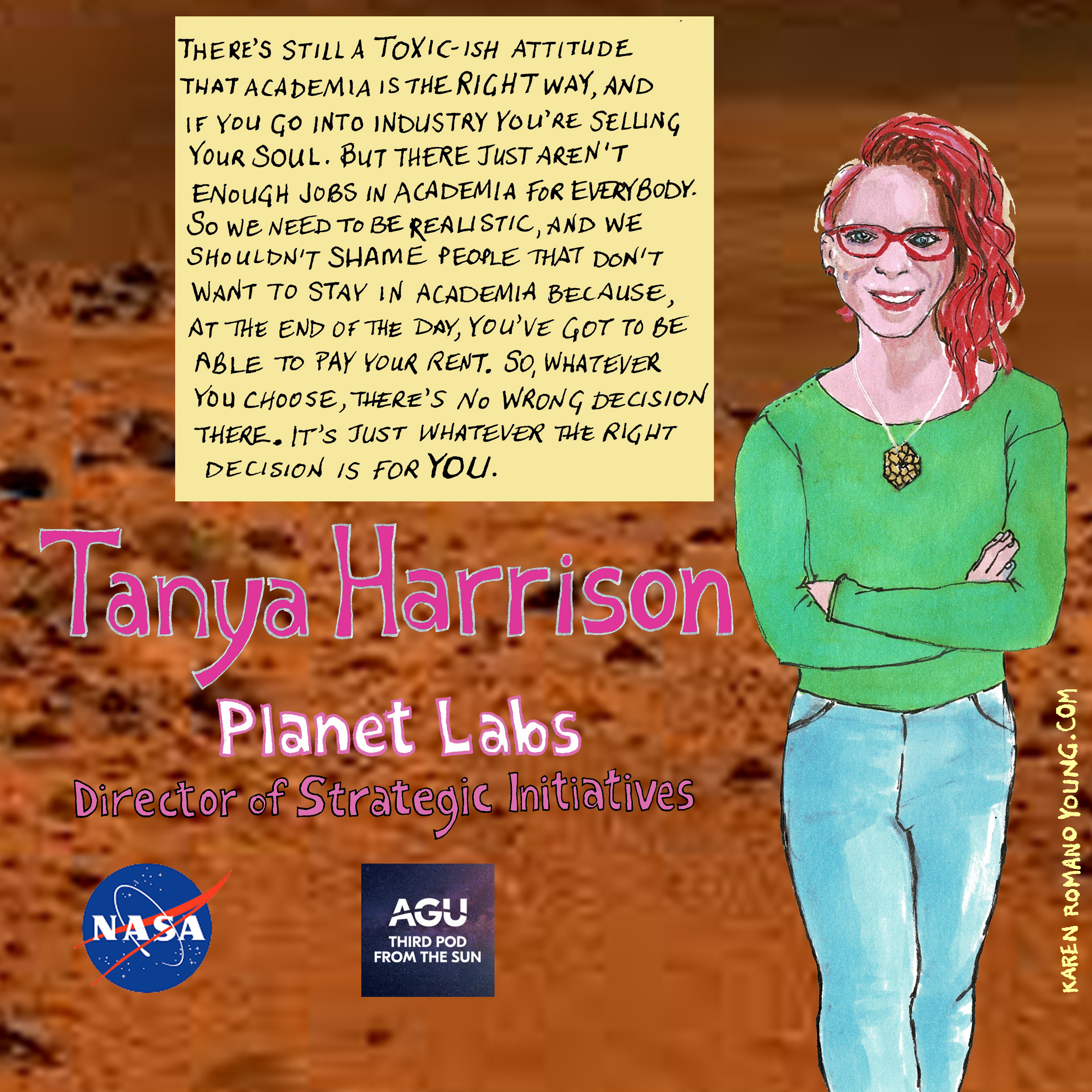 Tanya Harrison never thought she was going to be an astronaut. But she was determined to go to space. And she did just that – through satellites, first to Mars, and now looking back at our own third rock from the Sun as she uses satellites to map places near and far. We talked with her about what it’s like to be a Martian, making science more accessible to those with disabilities, and what it’s like to view some of the most beautiful places on Earth. Shane Hanlon:              02:05                Okay. Here’s the deal, right? If you’ve been listening for a while, you know that I’ve had some unfair feelings on space. That was then, and this is now. New podcast, new year, new feelings, and frankly, excitement about space. I’m here for all of the new telescopes and all of that. I have turned over a new leaf, and so very excited to hear more about space. Without further ado, let’s get into it. Our interviewer was Ashley Hamer.

Tanya Harrison:             03:51                There was a coming together of a bunch of things around the age of five that I think were all super influential. One was growing up watching a lot of Star Trek. Another was The Magic School Bus Lost in the Solar System book. I actually have the copy from when I was four or five years old on my bookshelf behind me, still. Randomly, the movie, Big Bird in Japan, which does not sound like it would be space related at first, but in the movie, Big Bird ends up meeting Kaguya-Hime who is the mythological Princess of the Moon in Japan. There’s actually a Kaguya mission named after this princess that the Japanese [inaudible 00:04:28], and she’s sent to the moon. For some reason that caused me to go out every night, and I would stare at the moon and stare at the stars.

Tanya Harrison:             04:35                It kind of evolved from there. Then I focused in on Mars, specifically, when the Pathfinder mission landed, and the little Sojourner Rover drove out onto the surface of Mars. I thought, “That’s so cool. I can’t believe that we’re driving robots on another planet. I want to work on that.” I became super focused. I was, “I got to figure out what I got to do to work on these rovers.”

Tanya Harrison:             05:02                When I was young, I wasn’t really encouraged to go down this pathway because the thought was, “Well, if you want to work in space, you have to be an astronaut. You’re probably not going to be an astronaut because I have a physical disability.” I was never going to make it through the test to become an astronaut. I knew that, but there weren’t a lot of other options shown to you about ways that you could work in the space sector. Now that you have access to things like social media, where you can see tons of amazing women working on these projects and just the diversity of jobs that are out there, that was something that we didn’t really have even five, 10 years ago. I think there’s been a revolution there for people to see all the different ways that they can get involved in space, whether it’s engineering, or being a photographer that photographs launches, or an artist that does renderings of exoplanets. There’s so many different opportunities out there now.

Tanya Harrison:             06:01                I have a condition called ankylosing spondylitis, which is an inflammatory, or arthritic, condition where your body decides that certain connective tissues are bad and eats away at them. Then since it can’t replace them, it starts to replace them with bone instead, so you end up with joints fusing together and stuff like that. It’s not fun.

Tanya Harrison:             06:23                Certainly as a geologist, it was tricky because geology is a very physical field. You tend to go out on field trips for school. They want you to hike for miles, or climb up mountains, or scale rocks. I couldn’t do any of those things so I felt like I was missing out in a lot of settings. In field courses, I didn’t feel like I was gaining everything that I should be. I either physically couldn’t do what they wanted me to do so I’d be left in a van somewhere while everybody else would go off to their site, and I would just wait for hours, or I would try to do stuff, and then find out part way I couldn’t do it. Someone would carry me back from the field. It’s a good bonding experience, I guess, with your classmates, but you know, also embarrassing at the same time. You shouldn’t have to do that. There’s ways to design these courses where they are more accessible to people that are not physically able to hike for miles and miles on end.

Tanya Harrison:             07:28                Absolutely. The fact that we have really high resolution data from space, it’s certainly not a complete replacement for going out in the field somewhere. I mean, that’s why we send rovers to Mars, on top of satellites. Having that on-the-ground data is really helpful, but you can still tell a lot of the story in a ton of different settings from the satellite imagery. It’s really revolutionary to be able to sit at your desk and do a lot of geology rather than going out into the field.

Tanya Harrison:             08:21                That’s a good question. Certainly the sense of awe I think is the big attractor because it seems so extraordinary and things that you wouldn’t encounter on a day-to-day basis. We’re kind of fascinated as humans about things that are exotic, and we don’t quite understand them, like dark matter or antimatter, or planets where you have volcanoes that are spewing sulfur, or gas giants where there’s no surface. We could never live there, but you wonder what’s going on underneath all the clouds. I think it’s something that really sparks curiosity for folks compared to the day-to-day. I don’t want to say it’s not as engaging, but it’s not engaging in the same way. It doesn’t engage your creativity and your imagination in the same way.

Tanya Harrison:             09:22                There’s still that toxic ish attitude in academia, that it is the right way, and if you go to industry, you’re selling your soul. There just aren’t enough jobs in academia for everybody. We need to be realistic, and we shouldn’t shame people that don’t want to stay in academia because, at the end of the day, you got to be able to pay your rent. Whatever way you choose, there’s no wrong decision there. It’s whatever the right decision is for you.